I ... got banned from that subforum. For justifiable reasons that I completely understand. I'll calmly accept my fate and happily volunteer some of my time here.

Can you ask for me?

Anita Blake's one of those that started out as non-porn, got really porny later on due to Creator Breakdown, and is starting to move away from the porniness recently.

That's should be okay then. I'll look at the page on Tuesday when I'm not busy.

Oh, and ... um... my condolences, members of P5. You have a very stressful job, and I wish you all well. For the record, I'm being very sincere. It means absolutely nothing coming from me, but I won't blame you guys if you want to leave. None of you. Not even the one that just left.

Meh, a little cleaning never hurt a page. If I do go there and look, the most I'll probably do would be to trim a few adjectives here or there. Unless it's a explicit shota or loli scene, I won't outright remove references to sex or nudity.

Full Battle Mode
shimaspawn from Here and Now Relationship Status: In your bunk

Reality is that, which when you stop believing in it, doesn't go away. -Philip K. Dick
encrypted12345

Looked over the Anita Blake page quickly while watching Toonami. It seems perfectly fine as is. It's not really the type of thing I'm interested though. Terrible and immature use of Sex Tropes.

Full Battle Mode
shimaspawn from Here and Now Relationship Status: In your bunk

If you just skip over the sex bits, the story is actually pretty good. Especially up to book 12.

Reality is that, which when you stop believing in it, doesn't go away. -Philip K. Dick
Komodin TV Tropes' Sonic Wiki Curator from Windy Hill Zone Relationship Status: I like big bots and I can not lie

... Eh, I'll just take your word for it. All I ask is that someone make sure that the page doesn't turn into an overly prurient, gushy mess.

Experience has taught me to investigate anything that glows.
shimaspawn from Here and Now Relationship Status: In your bunk

It's on my watchlist.

Reality is that, which when you stop believing in it, doesn't go away. -Philip K. Dick
Meeble likes the cheeses. from the ruins of Granseal

The squick in-universe entry on Anita Blake possibly goes into more detail than is necessary (and certainly comes across as nattery, regardless.) It could probably use a revamp.

Visit my contributor page to assist with the "I Like The Cheeses" project!
lu127 Paper Master from 異界 Relationship Status: Crazy Cat Lady

Can someone familiar with Mezzo Forte check to see if the page has examples from only the Bleached Underpants version?

I'll get right on that (It's more of a natter issue, but whatever.)

Hidan no Aria looks good to me (and I just gave it the third angel), but I'd like someone familiar with the series to take a look over the page and make sure it's clean.

Vapor Wear -it may need a little cleanup here. what do you guys think?

Agreed...this should probably be a "no external links" page, at the very least.

videogmer314 from that one place Relationship Status: Yes, I'm alone, but I'm alone and free

I don't think we need an image links subpage for it, either.

I think we should simply lock it up.

"For a successful technology, reality must take precedence over public relations, for Nature cannot be fooled." - Richard Feynman
Komodin TV Tropes' Sonic Wiki Curator from Windy Hill Zone Relationship Status: I like big bots and I can not lie

Let's not act too hasty here. All it really needs right now is a simple cleanup to remove any overly lewd content in its examples.

Experience has taught me to investigate anything that glows.
lu127 Paper Master from 異界 Relationship Status: Crazy Cat Lady

Before we restore Kite, we need to revamp the page so it points to the censored version. Here's the source: 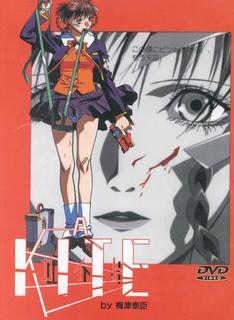 In Tokyo, a string of bizarre, unsolved murders have the police confounded and the media in a frenzy. The only known connections are the killer's use of exploding bullets, and the fact that each of the victims were famous, wealthy, or powerful individuals. Akai, the lead detective in these cases, knows more than he is letting on. Not only have he and his partner Kanie ordered each of the killings, but many of them have been carried out by his lover and adopted daughter, Sawa.

Under the pretense of "cleaning up the city" by getting rid of corrupt politicians and child molesters that are outside the reach of the law, Akai uses Sawa as his personal assassin. Holding misguided affection for Akai after he "rescued" her as a child from the scene of her parents' murder, Sawa has done his bidding for years without question. When she meets her male counterpart, a young man named Oburi who has been trained by Kanie, Sawa begins to question her role in life and the events that led her there. However, Oburi and Sawa soon find out that giving up their current lives will be no easy task, for Akai is not the kind of man that will take "no" for an answer.

Kite is infamous for its extreme violence and depictions of graphic rape, some of which appear to involve victims who are clearly underage. Like Umetzu's similar work Mezzo Forte, it has received three releases in North America: a General Release with most of the sexual content removed, a subsequent Director's Cut that leaves most of the controversial material intact, and a Special Edition that is presented as being totally uncut.

Kite Liberator follows a new young female assassin named Monaka Noguchi, who poses as a waitress in a maid cafe and kills criminals as "The Angel of Death" by night (said cafe also serves as the Front Organization). There are two primary storylines: one about the older brother of one of Monaka's past targets seeking revenge, and the other about Monaka's astronaut father coming home from space... wrong. Additionally, the sequel features a cameo by Sawa, now all grown up, Older and Wiser waitress colleague of Monaka (and a single mother). What Liberator doesn't feature is gratuitous rape and sex scenes.

A Live-Action Adaptation of the original OVA is currently in the works with David R. Ellis set to direct.

—> Sawa (to Oburi's cats): "Be patient, my friends. Very soon, Oburi will come home to us - right?"
喜べ
Meeble likes the cheeses. from the ruins of Granseal

For the description, I'd just modify the first line of the first paragraph to read "Kite is an Anime series written and directed by Yasuomi Umetsu." and add a warning similar to that on Anime.Mezzo Forte to the bottom.

Visit my contributor page to assist with the "I Like The Cheeses" project!
lu127 Paper Master from 異界 Relationship Status: Crazy Cat Lady

What about Rape as Backstory?

I believe the clean version alludes to the fact that the villain abuses the protagonist when she's younger (without showing the abuse, of course.) So it probably fits, however the page can certainly live without it if you feel it needs to be axed.

Visit my contributor page to assist with the "I Like The Cheeses" project!
shimaspawn from Here and Now Relationship Status: In your bunk

Ikki Tousen's description gushes a bit too much.

Reality is that, which when you stop believing in it, doesn't go away. -Philip K. Dick
SeptimusHeap from Switzerland Relationship Status: Mu

I think we can safely pull the 5th paragraph.

Peter Is The Wolf is supposed to be confined to its Bleached Underpants version. Can anyone go over and see what needs to be deleted?

喜べ
Nohbody "In distress", my ass. from Somewhere in Dixie Relationship Status: Mu

^ I already swapped out the URLs pointing to the "naughty" versions with the "general public" versions, back when P5 came into being. At a glance some of the entries could use some tweaking to make them more appropriate under current policy (not just P5 stuff, but standard wiki issues), but I'm kinda short on ambition for that project at the moment.

All your safe space are belong to Trump
Back Top
Total posts: 529