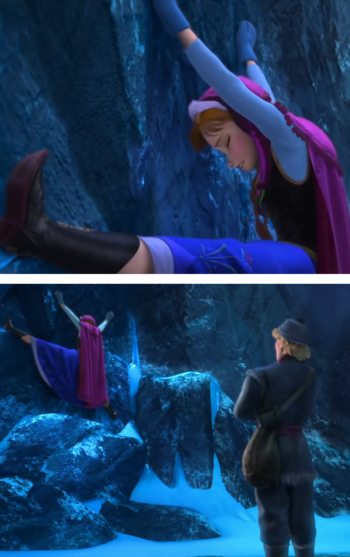 "Please tell me I'm almost there. Does the air seem a bit thin to you up here?"
Sometimes a character has a task to accomplish. They may have to climb some insane cliffs, reach the top of a long stairway, or cross a street. After a moment of preparation, they launch themselves to the task, usually shown as a Travel Montage. They give it their all. They sweat, gasp for breath, and struggle to push themselves for what seems like hours to complete the task.

Except, as we see when the camera pans out, they've only made a tiny amount of progress in the overall goal. Almost always Played for Laughs. They may or may not continue on with their task, but if they do continue, the rest of the task is usually not seen and the characters seem O.K. at the end, giving the impression that it was only the very start that was that difficult.

See also Not So Dire and Stop Drowning and Stand Up. Compare Not So Remote. Subtrope of Reveal Shot.

SpongeBob seems to write down his essay in a long amount of time, but it turns out he only wrote down a fancy "The".

SpongeBob seems to write down his essay in a long amount of time, but it turns out he only wrote down a fancy "The".