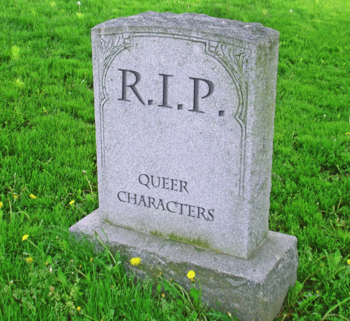 The reasons for this trope have evolved somewhat over the years. For a good while, it was because the Depraved Homosexual trope and its ilk pretty much limited portrayals of explicitly gay characters to villainous characters, or at least characters who weren't given much respect by the narrative. This was due to negative attitudes towards gay people and due to the Moral Guardians' Hays Code, which did not allow gay people to be shown on screen unless it was part of a plot line that showed that they were wicked. This meant that most of them would either die or be punished by the end. Even somewhat sympathetic characters would usually receive punishment, as their sexuality was perceived as a negative trait (similar to how one would write a sympathetic drug addict). However, as sensitivity to gay people became more mainstream, this then transitioned into the Too Good for This Sinful Earth narrative, where stories would tackle the subject of homophobia and then depict LGBT characters as suffering victims who die tragic deaths from an uncaring world. The AIDS crisis also contributed to this narrative, as the Tragic AIDS Story became its own archetype, popularized by films like Philadelphia. And then there are the cases of But Not Too Gay or the Bait-and-Switch Lesbians, where creators manage to get the romance going but quickly avoid showing it in detail by killing off one of the relevant characters.

Can be seen as Truth in Television in some cases, as gay and lesbian people are at a substantially higher risk for suicide and assault — see the tropes Gayngst-Induced Suicide and Homophobic Hate Crime. The fact that AIDS hit the gay male community most prominently provided potent fresh fuel for this long running trope (which, like many things about the eighties, still has an effect on more recent works). There may also be a higher prevalence of this trope in Period Fiction because of its supposed realism since historically there was lots of homophobic persecution — though undoubtedly plenty of acceptance, too.