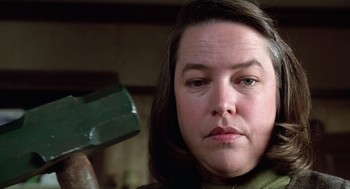 "Crazy fangirl" doesn't even begin to describe Annie Wilkes.
"And don't you think I understand what you're doing? You're trying to move him into the country... and you're keeping him away from me. And you're playing happy family. Aren't you? [begins to slice her own leg with a butcher knife] You wouldn't understand that because you're so... so selfish. He told me about you. He told me about you. He was very honest. If you weren't so stupid, you'd know that. But you're so stupid. You're so stupid... you're a stupid, selfish bitch!"
— Alex Forrest, Fatal Attraction, to Beth Gallagher.