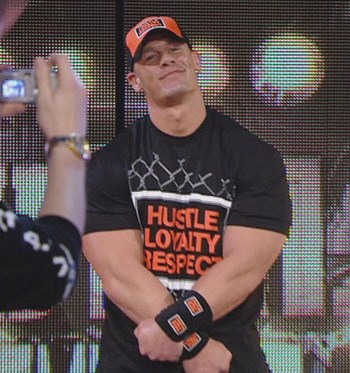 The WWE has a new ace...AND HIS NAME IS JOHN CENA!
In 2008, WWE found itself in familiar territory. Once again, changing times forced the company to go back to the drawing board and redesign themselves to stay relevant.
Advertisement:

With the untimely demise of Eddie Guerrero and the Murder-Suicide of Chris Benoit, a lot of attention was focused on the health and wellness of professional wrestlers. Additionally, WWE CEO Linda McMahon (the wife of company chairman Vince McMahon) was eyeing a run for U.S. Senate and she really didn't want the company’s image to tarnish her hopes of making it. While the rough-and-tumble days of the Attitude Era and the Ruthless Aggression Era had served WWE well, it was time for a new direction, and that new direction would be the old direction.

It was decided to go back to the kinder, gentler days of the Golden Age. The violence and vulgarity began to be scaled back, and WWE returned to the (mostly) family-friendly product it was in the 1980s. Like back then, when Hulkamania was running wild, they needed a big name star to build their Federation around.

And they had just the man for the job.

They took the former white rapper "Doctor of Thuganomics" John Cena and turned him into the next heroic babyface. His "take your vitamins, say your prayers" mantras would be "Hustle, Loyalty, Respect." And crowds ate it up. At least, they did at first, but more hardcore wrestling fans got sick of his ubiquitous presence quickly. This was also a big year for players like Randy Orton and Batista, who would have multiple title reigns over the course of the era. This would also mark the years in which several mainstays for the next decade, like Kofi Kingston, Dolph Ziggler, The Miz, and Sheamus, would begin their careers; some on the main roster, others in the revived ECW; which operated largely as a trial run for younger, less established talent as well as veterans in need of a new place to go after years of Raw/SmackDown mid-card shuffling, before finally being quietly shelved in 2010.

Speaking of the brands, there was a decreased emphasis from 2009 on for the identities for either, as RAW and Smackdown began to showcase wrestlers from either brand on their shows without making much of a big deal of it, to the point that in 2011, there was effectively no split in place, which meant that the World Heavyweight Championship and WWE Championship were two major titles... without shows that made them important to exist as separate entities in the first place. This was fixed in a unification match, creating the WWE-World Heavyweight Championship.

That didn't mean there was nowhere for the young guns to hone their craft, however, as another major change was the overhaul of the WWE's farm system. Florida Championship Wrestling, which was where WWE hopefuls were sent to train, was rechristened as WWE NXT. The original NXT concept was a Reality Show, where WWE hopefuls got to train and learn under mentors in the hopes of getting a WWE contract, but was eventually retired and re-vamped into a more conventional hour-long wrestling program on the newly launched WWE Network, which immediately began receiving rave reviews due to the far more wrestling oriented programming and fantastic characters.

Unfortunately, there were major set-backs in the women's wrestling department. By the time the PG era had begun, fan favorites like Trish Stratus and Lita had ended up retiring due to injuries or other opportunities, and the WWE Diva Search had restocked the roster with less experienced models or women from non-wrestling backgrounds hired primarily for their looks. By 2009, the women's division did actually include a good mix of actual wrestlers - such as Mickie James, Beth Phoenix, Melina, Jillian Hall, Katie Lea, Natalya (who debuted in this era), and the return of Gail Kim after she had become a star in TNA - and several former Diva Search contestants or model hires came into their own as wrestlers such as Michelle McCool, Layla (who formed Team LayCool), Eve Torres, Kelly Kelly, Alicia Fox, and Maryse. The period looked to be promising, as the PG switch would presumably force WWE to focus less on T&A, and a second women's title was introduced for the Smackdown brand (the Divas' Championship).

However, WWE's booking led to match times getting shorter (by 2011, it was considered a good week on Raw if a Divas' segment got five minutes), a lack of effort into consistent storylines, ridiculous restrictions like "no punching" or "no kicking", an extreme Girliness Upgrade, several women actually getting punished for their matches being "too good"note Melina and Michelle McCool if you're curious and WrestleMania being considered the worst time of year for the women as a result. The two women's titles were unceremoniously unified in 2010, to the dismay of most of the roster, with a second not being re-introduced until 2016 with the return of the brand extension. Gail Kim notably took to her Twitter to criticize the poor treatment of the women, before quitting in the middle of 2011. A few females who would become prominent players in later years - AJ Lee, the Bella Twins, Naomi, and Kaitlyn - would debut in this era. Women's wrestling website Diva Dirt was established during this time too, providing an outlet for women's wrestling fans.

Technology also changed quite a bit from the beginning of the era all the way into the next, as it coincided with the release of Hi-Definition TV, and the groundwork for what would soon be known as the WWE Network.

The PG Era wasn't entirely squeaky clean, however. One of the most ruthless stables since the Attitude Era, The Nexus, would form out of the ashes of the NXT reality show, and would run roughshod over WWE for a while. The back-half of the era was also the genesis of CM Punk's main event run, which frequently made dramatic and slightly edgier twists and turns as he brought certain characters (even the normally incorruptible John Cena) to their breaking points.

All in all, while many preferred the edgier product of the Attitude Era, there were relatively few faults with the PG Era, and it would set the stage for the direction for WWE in the future.

But not before making one person very unhappy...along with a host of their fans.