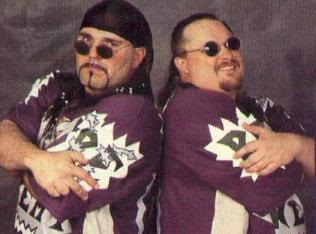 Johnny Grunge (Michael Lynn Durham, July 10, 1966 – February 16, 2006) and "Flyboy" Rocco Rock (Theodore James "Ted" Petty, September 1, 1953 – September 21, 2002) were an American Professional Wrestling Tag Team best known for their work in ECW as The Public Enemy. After having spent years in various promotions under different names, and after increasingly facing each other on international tours, including a dark (non-televised) match at the very first episode of WWF Monday Night Raw, they debuted as the Public Enemy at ECW UltraClash '93, September 18, 1993. They would go on to be 5x NWA ECW/ECW World Tag Team Champions

before going to WCW in 1996. They would hold the WCW World Tag Team Titles

for 8 days, beating Harlem Heat (Booker T and Stevie Ray) on September 23, 1996 and losing them back on October 1, in preparation for the Outsiders (Scott Hall and Kevin Nash) winning the belts and basically killing them off. They would flounder for some two more years in WCW before returning to ECW at ECW House Party 99, January 16, 1999, in response to a challenge made six days earlier at ECW Guilty As Charged by Buh Buh Ray Dudley. The Dudleys ran TPE out in February and they would be in and out of WWE and WCW by the middle of August. In between leaving WWE and returning to WCW in July, they were NWA World Tag Team Champions

for 2 days in June 1999. They would bounce around various independent promotions for the next three years, until Rocco, wrestling as a single, died of a heart attack during a match in September 2002.

"The Original Mack Daddies of Troping"