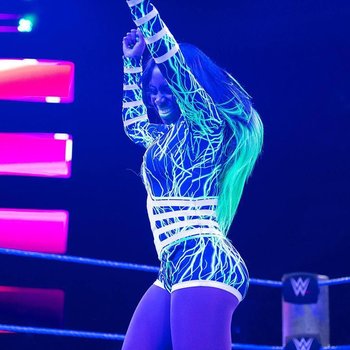 Feel the glow!
Trinity Fatu (née McCray, born November 30, 1987) is an American professional wrester currently signed with WWE under the ring name Naomi. She worked at their developmental grounds at FCW under the name Naomi Knight (or Night) from 2009 to 2011, where she was a one-time FCW Divas Champion. She also competed on the third season of NXT, where she came in second place. In 2012, Naomi debuted on the main roster as a valet for Brodus Clay, becoming a member of the Tons of Funk stable. She then formed a tag team known as The Funkadactyls with her fellow Tons of Funk valet Cameron that soon splintered off from Clay and Tons of Funk. Naomi and Cameron ended their alliance as well in 2014. In 2017 she became WWE Smackdown Women's Champion at Elimination Chamber but had to relinquish her title two weeks later due to injury, before winning it back at WrestleMania.
Advertisement:

Since 2013, Trinity has been featured as one of the main cast members of Total Divas. She married Jimmy Uso one year later in 2014.