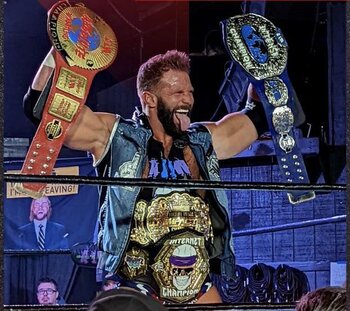 Alwayz Ready
Matthew Brett Cardona (born May 14, 1985) is an American professional wrestler best known for his time in WWE as Zack Ryder, where he is a one-time Intercontinental Champion

Cardona began working in the professional wrestling industry in 2004, mainly as a tag team with Brian Myers on the independent circuit and then eventually in WWE (with Myers going as Curt Hawkins), where they won the WWE Tag Team Championship. After the team split in 2009, he was featured sparingly on television. In 2011, he started publishing his own web series Z! True Long Island Story. This and his use of social networking websites helped him in establishing a fan following and a bigger television role with WWE as a result. However, it was later reported that this did not impress the head honchos at WWE, who bought the rights to Ryder's show basically just to cancel it and proceeded to return him to jobber status, effectively putting him Out of Focus. Critics of WWE have pointed to Ryder as an example of how politics have bogged the company down in recent years. Besides winning the Intercontinental Championship in a ladder match at WrestleMania 32 (before he lost the title the next night on Raw) and winning the tag team titles with Hawkins a second time at WrestleMania 35, he would remain in that status until both him and Hawkins were released by WWE in April 2020 as part of budget cuts stemming from the COVID-19 pandemic.

On the July 30th 2020 episode of AEW Dynamite Ryder (now going under his own name) ran in to save his real life friend Cody Rhodes from a post-match beatdown. However his initial run with AEW was only for 2 months and his deal expired after All Out 2020, making him a free agent, although he didn't rule out returning the promotion again at a later date. He would continue his tour of the wider wrestling world in 2021 when he appeared in Impact Wrestling on a similar limited appearance deal. In July of the same year, Cardona appeared in GCW, beating Nick Fucking Gage for the GCW Championship, and he did it by beating Gage in the latter's signature Deathmatch. On 2/12/22 he would defeat Trevor Murdoch to become the new NWA champion.

"Oh, TV tropes. Tell me everything you know:"