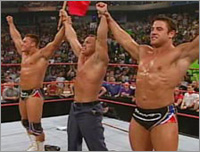 The stable began when WWE aired vignettes of two arrogant "Frenchmen" (Duprée and Grenier, who are both actually French-Canadians) attacking the United States and its policy. They made their first appearance on the April 28, 2003 edition of Raw by attacking Scott Steiner, who had made remarks two weeks earlier comparing France to Hell, and they ended up defeating Steiner and Test at Judgment Day 2003 on May 18, 2003 in the team's pay-per-view debut. Duprée and Grenier went on to win the World Tag Team Championship from Kane and Rob Van Dam at Bad Blood 2003 on June 15. Rob Conway would be later introduced to the group posing as an American serviceman abused by Duprée and Grenier before The Dudley Boyz came out to make the save and attack La Résistance. However, when they brought Conway in the ring with an American flag and had their backs turned to Conway, he attacked them with the American flag and then tore it off the pole and laid it on top of them. The trio went on to feud with several other tag teams before Grenier suffered a back injury in October 2003. Duprée and Conway would hold the team together until Grenier's return on the March 15, 2004 edition of Raw, but the stable was broken up the very next week when Duprée was drafted to SmackDown. Grenier and Conway would continue teaming up, winning the tag team titles three more times, before disbanding in 2005.

Not to be confused at all with La Résistance.