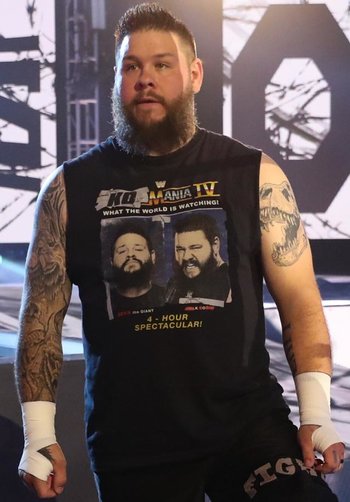 The Prizefighter.
"I will fight anyone and everyone, and that's why I'm the champ!"
Advertisement:

Kevin Yanick Steen (born May 7, 1984) is a Canadian professional wrestler trained by Jacques Rougeau and Pierre Carl Oulette best known for his work in Ring of Honor, Pro Wrestling Guerilla, and other independent promotions. He signed to WWE in 2014 and was put to work on its developmental brand, WWE NXT, as Kevin Owens.

Among the feds Steen has won titles in are Squared Circle Wrestling (2CW), Capital City Championship Combat (C*4), North Shore Pro Wrestling and All American Wrestling. In particular, he has been an ROH World Heavyweight

Champion (1-time each), as well as PWG World Heavyweight

(3-times each). His partner for nearly all the aforementioned tag title victories, as well as his arch-enemy in the 2010 Wrestling Observer Feud of the Year in ROH, is his real-life best friend El Generico. They've since resumed their feud in NXT and WWE as Kevin Owens and Sami Zayn, until Zayn turned heel in October 2017 and began teaming with Owens.

Owens is a former NXT Champion

"This is the Kevin Owens Show, haven't you heard?!"