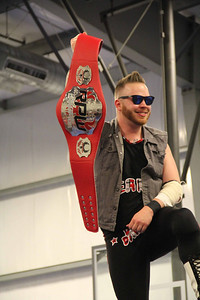 Jeremy Leary is an American Professional Wrestler known for his work in CHIKARA and many New England independents. He debuted in 2009 as Dirt Dawg, switching to Leary soon after. He arrived in CHIKARA in 2016 and got involved in a feud with "Juke Joint" Lucas Calhoun during the "lost" Season 17. It would slowly be revealed that he and Calhoun were rejected clones from Professor Nicodemus' Volgar Quotient.

Along with his RPW Heavyweight Title reign, he was the last-ever NEFW (New England Frontier Wrestling) Heavyweight Champion

He has nothing to do with the voice actor from Up.

"The Man With The Best Tropes In Wrestling":