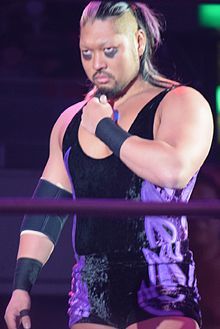 " This is EVIL..Everything is EVIL."

Watanabe trained under Animal Haniguchi, where he would meet someone who's fate would be intertwined with his, Tetsuya Naito. After competing his training, he enrolled in the New Japan Dojo as a Young Lion, debuting for the promotion in 2011. As is the tradition with Young Lions, he spent most of his time taking losses and competing in opening matches to gain experience. As is the custom, after his training he graduated and was sent on an excursion, wrestling primary in The United States for Global Force Wrestling (GFW) and Ring of Honor (ROH) from 2014 to 2015.

Two years later, Watanabe had undergone a transformation when he made his return. Gone was the kind young man eager to learn how to wrestle. Instead there was something else. Something Dark, Something Wicked, Something... Evil. Takaki Watanabe was no more, there was only now EVIL, The King of Darkness. Looking like The Grim Reaper himself he returned to New Japan at Destruction 2015 as he aligned with Naito becoming the first member to join Los Ingobernables de Japon and as his right hand man.

EVIL quickly found success in New Japan Pro Wrestling in both singles and tag action. Along with SANADA, he became a two time World Tag League Winner, IWGP Tag Team Champion, NEVER Openweight Singles Champion, and NEVER 6-Man Tag Champion. The brotherhood of LIJ would continue to win, but SANADA and EVIL made it clear that they, like Naito, would challenge the IWGP Heavyweight and Intercontinental Champions, whoever they may be.

Eventually, an inter-LIJ challenge was unavoidable. Naito was at the top of the mountain in New Japan after winning the IWGP Heavyweight and Intercontinental Championships at Wrestle Kingdom 14. As the COVID-19 pandemic of 2020 resulted in almost every non-Japanese wrestler (barring only Gabriel Kidd and Zack Sabre Jr.) unable to enter Japan, the 2020 New Japan Cup saw three members of LIJ in the semifinals, with Hiromu losing to Okada, and EVIL displaying an even more vicious streak then usual, using whatever means necessary in order to win. Before his Quarterfinal match his opponent didn't even get a chance to enter before EVIL attacked him with a chair and destroyed his knee forcing the match to end in only two minutes. in the semifinal against his partner SANADA, EVIL showed no remorse or mercy eventually defeating him in 20 minutes. In the finals EVIL would face The Rainmaker Kazuchika Okada, with the winner going on to face Naito. During the match, Bullet Club's Gedo and Yujiro Takahashi attacked and distracted Okada, seemingly a random reignition of their old feuds with their former CHAOS ally. This gave EVIL his chance to win the match and the tournament.

After winning it, Naito came down to the ring and impressed, calling for the LIJ fist bump. EVIL raised his hand.

But he had a different symbol instead he was showing, changing his raised fist to the Two Sweet symbol of Bullet Club. EVIL had defected against the very faction he co-founded, to challenge his fellow cofounder for the IWGP Heavyweight and Intercontinental titles. And with the help of his new stablemates he won, bringing both titles to the club with him, alongside his new manager, freelancer and former IWGP Tag Team Champion Dick Togo.