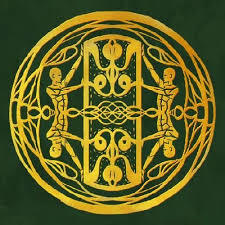 is a sister site of the SCP Foundation, based on the main location of the Serpent's Hand Group of Interest. But while the SCP Foundation is (primarily) a Science Fantasy/Horror site with strict tone, format and minimum hard science fiction requirements, the Library plays much faster and looser with its requirements. Almost any type of story is fair, from crime to science fiction. Whereas the Foundation focuses on evoking a mix of fear and scientific curiosity, the Library focuses on creating a feeling of “wonder”. This doesn't mean that other types of stories are forbidden; the stories can be just as gruesome or disturbing as what you might find on the Foundation.

In universe, the Library is a Great Big Library of Everything located outside of any other universe, accessible through portals called “Ways”. The Library's catalog is massive, containing books that have already been written, have yet to be written, and will never be written, from an equally massive number of universes. Who created the Library, what purpose it serves, or where the books come from are all unknown, but many theories have been proposed.

The patrons are just as varied as the books. You're just as likely to find a human scholar as you are to find a god, talking animal, or alien, non-Euclidian explorer. Assisting in running the Library are the librarians, people who have broken the rules of the Library and physically transformed. The eyeless Archivists serve at the main desks, and can tell you where to find each book. Docents, mouthless humanoids with lanterns for hands, enforce the rules and help patrons wandering the shelves. Restocking of shelves is performed by the spider-like Pages.

Note that most stories are not set in the Library itself- it simply acts as a Framing Device. Most of the stories take place in one of the (seemingly) infinite number of worlds it connects to, or maybe they're made up, or maybe it's a bit of both. Who knows?

. The archives, stories focusing on the Library itself, can be found here

This wiki provides examples of: