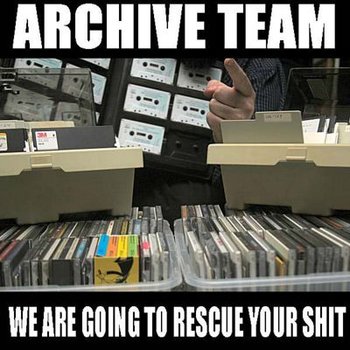 , a loose, almost anarchical collection of programmers with the singular intent of preserving internet history.

Their website, though being technically a wiki, serves as more of a group blog and record of their activities. In it you will find entries about individual websites, those entries will inform you of the basic aspects of the website, its activity and vital sings, and go into detail about their plan and efforts to archive the site. You will also find that it's very informally written and very snarky — not that this is unheard of among wikis (and especially among those that are written as group blogs), of course, but still, considering the site's purpose and subject matter, this is still quite jarring, jarring enough for them to get their own page here(!), in fact.

Aside from the Snark, though, you will also find that there are two pages that are arguably one of, if not the most important pages of the website: The Deathwatch

page and the Alive... OR ARE THEY

The "Deathwatch" page lists, as you'd expect, sites that are giving out their final breaths and should be archived immediately. The page also contains a list of major events on the internet that, on one way or another, involved the loss of content and information. For example, the shutdown of Orkut

and Vine, the removal of Leelah Alcorn's

tumblr account and other forms of online presence, and Encyclopedia Dramatica's transformation into Oh, Internet! are all part of that list, along with a certain biting, snide wit that can be observed in entries like "Nokia Memories

In order to archive websites, the Archive Team uses an appliance called "warrior"

, it can be downloaded by members and volunteers and used to download websites and upload them on Archive Team's archive, usually so they can be later uploaded on the Internet Archive in WARC

format. We're telling you this because, if you came here from the Web Comics page, this is the information you're looking for, this is how you'll save those comics. Now go contact these guys and get to work!

. You can also view a list of their past, present, proposed, and cancelled projects by clicking here

. Their IRC channels can also be found here

Sites (and other stuff) they've archived