What Could Have Been / Frozen 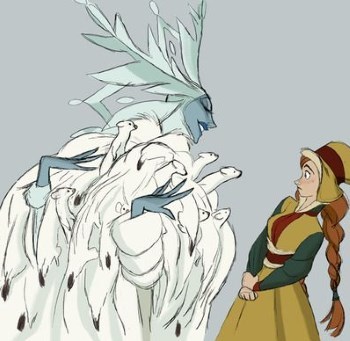 Elsa was going to be a villain, but still a Friend to All Living Things.

Frozen has a long and storied production history at the House of Mouse. Well, technically. Walt Disney himself had wanted to tackle a live-action/animation hybrid adaptation of Hans Christian Andersen's The Snow Queen all the way back in the 1930s, as a follow-up to the studio's upcoming feature film Snow White and the Seven Dwarfs. That plan was a bust, but the idea of bringing The Snow Queen to the big screen remained at the animation studio, being revived again and again throughout the 1990s and 2000s with new concepts and ideas before frustrated animators and writers would abandon it once more.

With all that in mind, the final attempt that became the film which audiences came to know and love in the 2010s had more than enough changes made during the development and production process that we're privy to which justifies them needing its own page, even without the details from previous attempts.