What Could Have Been / DC Extended Universe 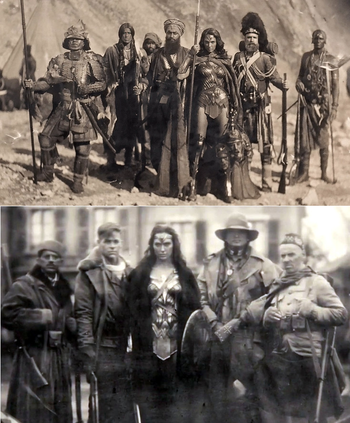 Top — The Wonder Woman origin story as originally envisioned by Zack Snyder's creative team, set in 1854 during The Crimean War.
Bottom — How the movie turned out with Patty Jenkins' input, set in 1918 during World War I.
There's a pretty large amount of What Could Have Been regarding Warner Bros' DC Comics-based film franchise, both due to cancelled projects before it was launched as the DC Extended Universe and the multiple cases of Creative Differences, Troubled Productions and Executive Meddling happening in it since. Add to that the usual high-profile casting choices that ultimately went nowhere, which to be fair is commonplace in such blockbusters.
Advertisement:
open/close all folders
Miscellaneous
Various Trivia
Future Projects
Aquaman and the Lost Kingdom
Batgirl
Advertisement:
Shazam! and the Fury of the Gods
Justice League Dark
Val-Zod