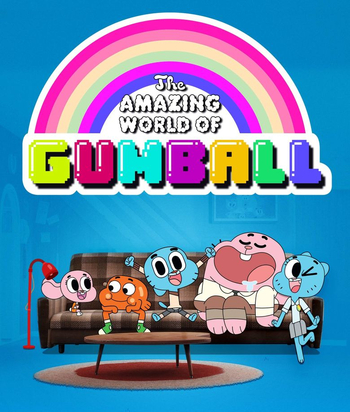 Left to right: Anais, Darwin, Gumball, Richard, and Nicole.
"Wait a minute. This here is a talking and dancing banana who somehow has a butt. We're in a school with a T-Rex, a ghost, a toast, and whatever Principal Brown is! Now, who dares to say this world isn't amazing?! The world is what you make it!"
— Gumball, "The Others"
Advertisement:

Created by Ben Bocquelet, The Amazing World of Gumball is the first commission from Turner Broadcasting's Cartoon Network Development Studio Europe. Combining a mixture of several animation techniques with live-action backgrounds, the series follows the misadventures of a hapless twelve-year-old cat named Gumball Watterson, who lives in the weird and wacky world of Elmore. Joining him is his best friend and adopted brother Darwin, the one-time pet fish who grew legs and joined the family. The two of them go to Elmore Junior High where all sorts of strange characters roam the halls.

While the reception to the first season saw it mostly dubbed as So Okay, It's Average, it quickly grew in popularity and reputation as it progressed, turning into a fast-paced, highly meta and heavily satirical comedy that often weaponised its art-style into full-blown psychedelia, essentially becoming the Cartoon Network version of South Park. The series is also infamous for having hefty amounts of raunchy and morbid humor - including one notorious scene that had a literal dead baby joke - and being frequently Bowdlerised as a result. The only place the show can be seen uncensored is the series home of the United Kingdom, as every nation Bowlderises the show differently.

With all that in mind, Gumball has become somewhat of a powerhouse for Cartoon Network, with the show winning several awards for both its writing and animation as well as eventually coming to rival a certain pants-wearing sentient sponge in ratings.

On February 17, 2021, The Amazing World of Gumball: The Movie! was confirmed to be in production. On September 21, 2021, Bocquelet was confirmed to be on board to executive produce and direct. The film will serve as both the Grand Finale to the original series and a Pilot Movie to a brand new one. However, on August 19th, 2022, the Discovery merger with Warner Bros. caused a long string of cancellations of streaming shows and upcoming projects, which ended up causing the movie project to be cancelled by HBO Max and Warner Bros., though it's being put up for sale for other streaming services, delaying its release.

The series' launch trailer can be seen here