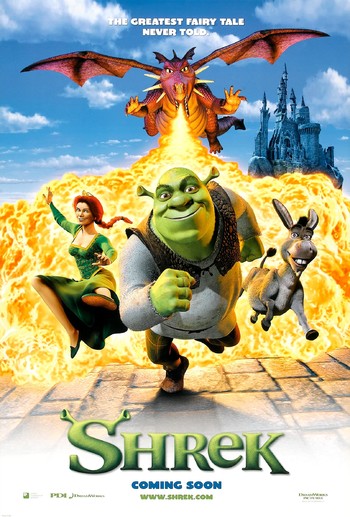 The Prince isn't charming.
The Princess isn't sleeping.
The sidekick isn't helping.
The ogre is the hero.
"Once upon a time, there was a lovely princess.
But she had an enchantment upon her of a fearful sort, which could only be broken by love's first kiss.
She was locked away in a castle, guarded by a terrible fire-breathing dragon.
Many brave knights had attempted to free her from this dreadful prison, but none prevailed.
She waited in the dragon's keep in the highest room of the tallest tower, for her true love... and true love's first kiss."
[tearing out page, chuckling] Yeah, like that's ever gonna happen! What a load of (FLUSH!)
— Shrek, opening lines
Advertisement:

Shrek is a 2001 DreamWorks Animation CGI film very loosely based on the 1990 William Steig book of the same name. It was directed by Andrew Adamson and Vicky Jenson, with a script by Ted Elliott, Terry Rossio, Joe Stillman and Roger S. H. Schulman. The film features Shrek (Mike Myers), a grumpy ogre living happily alone in his swamp, where he regularly frightens off villagers and lives the lazily luxurious life of an ogre. However, his perfect world is rocked when his loving home is invaded by fairy tale creatures simply seeking refuge after being cast into exile by the cruel-hearted Lord Farquaad (John Lithgow). When Shrek confronts Farquaad, he agrees to let the ogre live in peace if he can rescue the Princess Fiona (Cameron Diaz) from a dragon guarded castle so that Farquaad can marry her and become a true king. With the aid of his new and obnoxiously garrulous self-proclaimed best friend, a talking Donkey named Donkey (Eddie Murphy), Shrek sets off on his quest to restore balance to the delicate fairy tale world he's living in.

Shrek also was the winner of the first ever Academy Award for Best Animated Feature. And it was selected by the Library of Congress for preservation in the National Film Registry, making it the first and thus far only animated feature not from Disney and Pixar in the registry. As it was from 2001, it also became the first piece of animation from the 21st century to have that honor as well.

open/close all folders
A-M
N-Z
♫ I'm in love, ooh
I'm a believer
I couldn't leave her if I tried ♫
Feedback