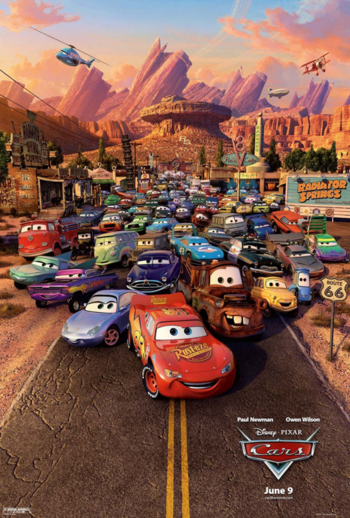 The first film for the Cars film series (2006) centers around Lightning McQueen (voiced by Owen Wilson), an arrogant up-and-coming hotshot stock car racer whose only driving concern is winning. The film opens with McQueen vying for the Piston Cup, a coveted prize which assures the winner of a lucrative sponsorship. Despite a valiant effort, McQueen ends up in a three-way tie with retiring racing veteran Strip "The King" Weathers and perennial runner-up Chick Hicks. A tie-breaking race is scheduled a week later in California, and McQueen urges his driver Mack to get them there immediately.

Along the way, McQueen gets lost, ending up in Radiator Springs, a quiet rural town in a forgotten segment of Route 66. After accidentally tearing up the town's main road, McQueen is sentenced to repairing it as community service. As he toils to finish his service and get to California, McQueen makes friends with the locals, including Tow Mater and former big-city hotshot Sally Carrera, and learns that there's a lot more to life than just racing to the finish line. It's been noted that it is a kid-friendly version of Doc Hollywood.

The movie was released on June 9, 2006, accompanied by the Pixar short One Man Band.

Holds the distinction of being the last Disney film released on VHS, as part of an extremely rare release

◊ from the Disney Movie Club. Said tape is perhaps one of the most highly sought-after in existence.

Pixar has also produced a number of Cars-related shorts, such as "Mater and the Ghostlight" (included with the Cars DVD release) and "Mater's Tall Tales" and "Tales from Radiator Springs" for the Carstoons series. More information about these can be found on the Pixar Shorts page.

Sheriff backfires when chasing McQueen, leading him to think he's being shot at.

Sheriff backfires when chasing McQueen, leading him to think he's being shot at.