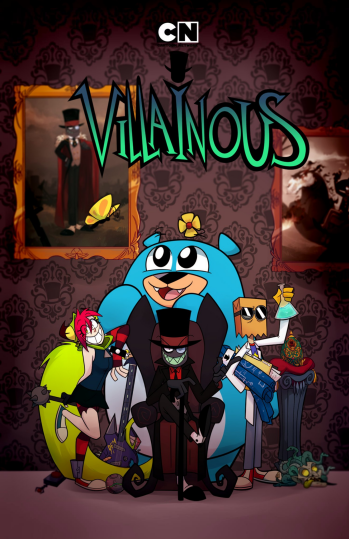 Evil is Our business, and business is good. From left to right: Demencia, 5.0.5. (back), Black Hat, Dr. Flug, & a Medusa head (floor).
"Problems with heroes?"
— Black Hat
Advertisement:

Villainous (Villanos in Spanish) is a Cartoon Network animated series created by Alan Ituriel. The show was the winner of a "Pitch Me Anything" contest hosted by the television network in conjunction with Mexican creative arts festival Pixelatl. It is the third original animated production to come out of Cartoon Network Latin America following CN Mexico's Santos vs the Clones miniseries and CN Brazil's Jorel's Brother.

The series follows the misadventures of the infamous Black Hat, a vulgar and sharply dressed narcissistic inhuman fiend who does his part to make the world a little more vile and its heroes a little more dead. Aiding him (with varying degrees of consent) are his cohorts: the meek scientist Dr. Flug, the adorably failed bestial genetic experiment 5.0.5., and his biggest and most violently deranged fangirl, Demencia.

Villanous began as a 10-episode Mini Series that premiered May 15, 2017 and was distributed through the Cartoon Network Anything App, with episodes first being released in Spanish

), with them becoming officially available in English

" began December 21, 2017. This consisted of eight additional minute-long shorts, a series of 11-minute Villain Orientation Videos in which Black Hat and company critique the work of various CN villains, and a more formal 11-minute pilot episode. Most of these are available in this playlist here

, with those not linked available here

. English fansubs can be watched here

. This second phase also included a short series of comics that can be found on Cartoon Network Mexico's Facebook

for a full-length series was released, with a pilot episode for said series being released June 2019. After some delays, the series would debut on both HBO Max Latin America and Cartoon Network Mexico on October 29, 2021.

Villainous has also had a number of crossovers with other Cartoon Network properties outside its own various shorts. In October 2018, the Halloween Episode of the CN Latin America web series Toontubers, which stars Mordecai and Rigby as gaming YouTubers, had the characters used by the Black Hat Organization as test subjects against the animatronics of Freddy Fazbear Entertainment, which Black Hat recently bought in a corporate takeover (original version here

). In October 2020, the characters would made their United States debut in the Victor and Valentino episode "Villainy in Monte Macabre."