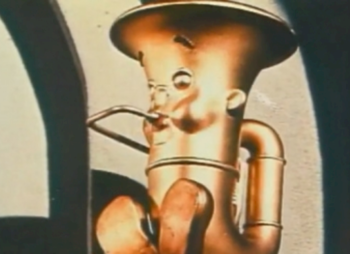 Tubby the Tuba (1947) is George Pal's final Puppetoon short, adapted from the children's record of the same name written by Paul Tripp and composed by George Kleinsinger.

Once upon a time, there was an orchestra which was all busy tuning up. Tubby, the orchestra's tuba, laments that he only ever gets to play the "oompah" rhythm and never a pretty melody, which the other instruments respond to by laughing him out of rehearsal.

On his way home, he stops by a pond and meets a bullfrog who also likes to sing pretty melodies but never has anyone listen to him. He teaches Tubby a melody, telling him to play it for his orchestra the next day. Tubby obliges, much to the surprise and pleasure of their guest conductor, Senior Pizzicato. Soon, the whole orchestra joins in and Tubby gets his wish to play a beautiful melody with them.

After the film's release, Paramount closed George Pal's Stop Motion Animation studio and Pal moved on to a successful career in live-action.

For the 1975 traditionally animated feature adaptation of the same story, go here.