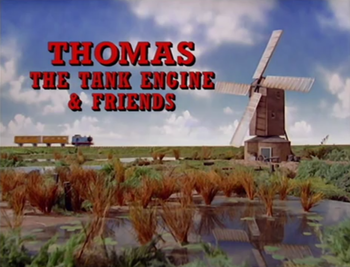 Thomas the Tank Engine & Friends, now known as Thomas & Friends, is a British series first broadcast in 1984. It began life as The Railway Series, a series of books about a group of talking steam engines living on the Island of Sodor and the adventures they have under the guardianship of the Fat Controller (Sir Topham Hatt). The books were originally written by the Reverend Wilbert Awdry; his son Christopher later took on the job. There is also a widely-available series of books based on TV episodes.

The series has been known to have had a following among people with disabilities, especially people with autism and Aspergers, in part thanks to the usage of static imagery in the model series.

After 12 series of having Shifted to CGI, the 24th series was the last for the show. A new Continuity Reboot, Thomas and Friends: All Engines Go!, is due to launch in October 2021 which will switch to 2D animation and give the characters new redesigned appearances, to make them appeal to younger modern viewers, in addition to having a new continuity.