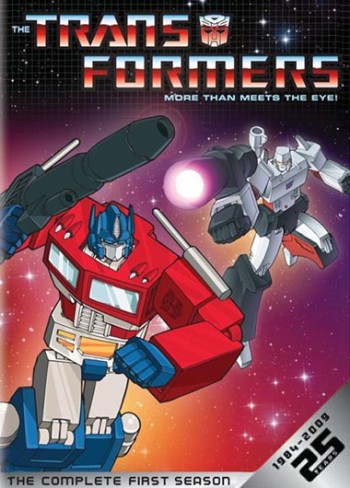 Autobots wage their battle to destroy the evil forces of the Decepticons!
"Many millions of years ago, on the planet Cybertron, life existed, but not life as we know it today. Intelligent robots that could think and feel inhabited the cities. They were called Autobots and Decepticons. But the brutal Decepticons were driven by a single goal: total domination. They set out to destroy the peace-loving Autobots, and a war between the forces of good and evil raged across Cybertron."
—Narration from the first episode.

With their homeworld depleted of energy due to the war, the Autobots leave on their ship to find a new planet with energy sources. The Decepticons follow in a ship of their own. The ensuing battle led to them crashing on Earth. Millions of years later (in 1984), both factions wake up, resuming their war on our world.

The Transformers was the first Transformers cartoon, part of the Transformers: Generation 1 franchise. It premiered in 1984. The writing and distribution of the series was handled by both Marvel Productions and Sunbow Entertainment. Animation was done by Toei Animation and a few other (uncredited, just like its sister series) studios, including AKOM in their first project, some unknown studios

The continuity of this series provided the basis for Transformers: Wings of Honor.

Jazz rollcalls the Autobots as they transform and roll out.

Jazz rollcalls the Autobots as they transform and roll out.