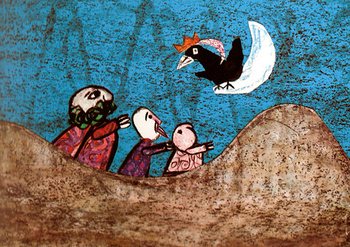 The Thieving Magpie is a 1965 animated short film (ten minutes) from Italy, directed by Giulio Gianini and Emanuele Luzatti.

Unsurprisingly, it uses the music from The Thieving Magpie by Gioachino Rossini, although it has a different story (so it's not an Animated Adaptation). In this story three kings, along with their entourages, go out on a bird hunt. They let loose an amazing number of arrows which kill a great many birds. However, left alive is a magpie, which turns the tables. After the three hunting parties have all exhausted their arrows, the magpie goes on the attack, stealing the crowns of the three kings before performing even more outrageous tricks on them.

Compare Pulcinella, another Luzzati short that had a similar style and was also accompanied by Rossini music.