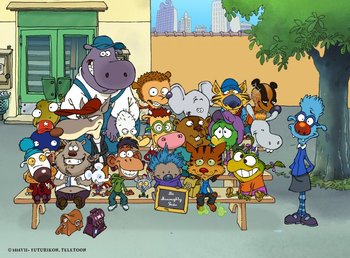 "Too fat, big feet, too tall
If you stink, you talk, you're much too small
If you're afraid of the dark, your weakness can become a superpower
You got some pimples on your face, already lost the human race
You're jealous or you're paranoid, you know you're not an android
Those little differences make us what we all are...
Just ask the Minimighty Kids!"
— Expository Theme Tune in the first season
Advertisement:

The Minimighty Kidsnote Also known as The Minimighty Squad in the second season, and Les Minijusticiers in French. is a French series that follows a cast of animal children at a school. Each episode focuses on one particular character as they struggle with an often embarrassing issue that alienates them from the other students. They later go to sleep and gain temporary superpowers that have something to do with said quirk.

The series is an adaptation of a comic book series of the same name that ran from 2007-2011.

Two seasons of the series are on Netflix in the U.S. and it also can be found on the series' official YouTube channel. It also airs on Teletoon in Canada.