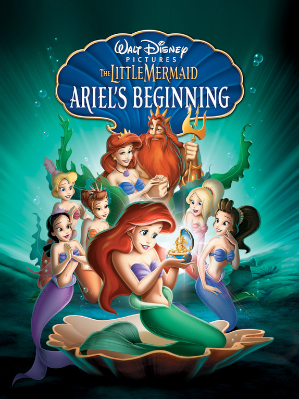 Every tale has a beginning, but only one begins Under the Sea.
Advertisement:

A 2008 Direct to Video Prequel to Disney's The Little Mermaid, and the last of a very long chain of DTV Disney Animated Canon sequels, prequels, and midquels after John Lasseter took charge of Disney's animation department and killed any future films of this nature.note Ironically, the only movie in said chain with a story set entirely before its predecessor (predecessors, in this case). This film reveals the cause of King Triton's fear and hatred of humans to be the death of his beloved Queen Athena, Ariel's mother.

During a family excursion on the surface, Triton gives his queen a music box. A pirate ship appears, and Athena is killed while attempting to save the music box. Heartbroken, Triton bans all music from Atlantica.

Years later, a now teenage Ariel, dissatisfied with life, joins an illicit music club. Meanwhile, the princesses' governess Marina Del Ray, with the help of her manatee assistant Benjamin, is plotting to get Sebastian's job as Triton's right-hand man.

Followed in chronological order by The Little Mermaid.

Sebastian: "But even the brightest days can be darkened by an unseen tempest."
Feedback