Western Animation / The Good, the Bart, and the Loki 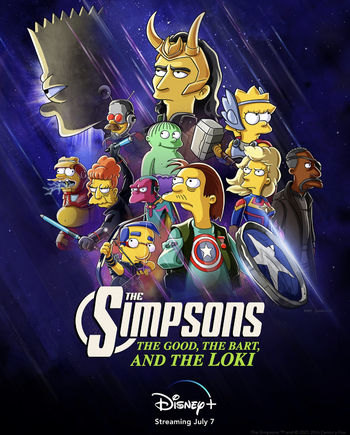 The Good, the Bart, and the Loki is a 2021 animated short based on The Simpsons and the Marvel Cinematic Universe. Directed by David Silverman, it is the fourth standalone Simpsons short and the second one made for Disney+. It’s also the first short to be focused on someone other than Maggie.

After once again being defeated by Thor, Loki (voiced by Tom Hiddleston) is banished to Springfield, where he befriends Bart and inserts himself into the Simpson family. Meanwhile, Lisa ends up gaining the power of Thor and assembling a team of Springfield's mightiest heroes in an attempt to stop him.

The short premiered on July 7, 2021, the same day as the penultimate episode of the first season of Loki.

Tropes appearing in this short