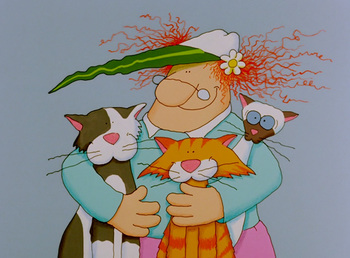 The Dingles is a 1988 Canadian animated short based on a book by Helen Levchuk, directed by Les Drew for National Film Board of Canada.
Advertisement:

Its titular characters are an old woman named Doris Dingle and her only companions: Donna the snobby Siamese, DeeDee who likes to tap Doris' cheek with her paw, and all-around good guy Dayoh. The four live a carefree and idyllic life, but one day, a huge storm suddenly arrives and nearly threatens to put an end to their usual routine.

You can view the short here