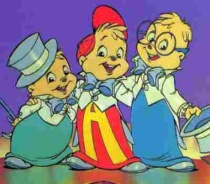 Also, in 1990, Alvin, Simon and Theodore starred in a drug abuse prevention special with other popular Saturday morning showsnote Papa Smurf, Hefty Smurf & Brainy Smurf as well as a handful of other Smurfs (Harmony Smurf makes a brief cameo in the comic book laying on the floor) from The Smurfs; Alf from ALF: The Animated Series; Garfield from Garfield and Friends; Baby Kermit, Baby Piggy & Baby Gonzo from Muppet Babies (1984); Slimer from The Real Ghostbusters; Pooh Bear & Tigger from The New Adventures of Winnie the Pooh; Bugs Bunny & Daffy Duck (Wile E. Coyote's mentioned and his time machine's used) from Looney Tunes; Huey, Dewey and Louie from DuckTales (1987) and Michelangelo from Teenage Mutant Ninja Turtles called Cartoon All-Stars to the Rescue.

The Chipmunks provides examples of the following tropes:

Alternative Title(s): Alvin And The Chipmunks