Western Animation / The Adventures of Tintin 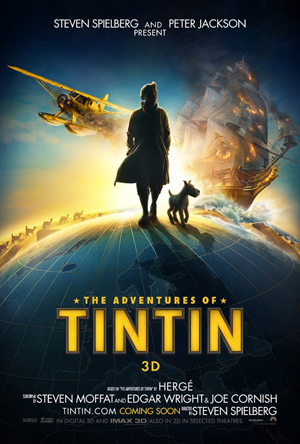 The Adventures of Tintin is a 2011 animated/motion capture film by Steven Spielberg based on the Tintin comic series, animated in Motion Capture CGI by Peter Jackson's Weta Digital.

Tintin (Jamie Bell) is taken onboard a ship, the Karaboudjan by Sakharine (Daniel Craig), who believes he holds one of the scrolls leading to the lost treasure of the Unicorn, hidden away in three identical replicas of the ship. With the help of the Karaboudjan's Captain Haddock (Andy Serkis), Tintin escapes the ship and begins his quest to find the three scrolls before Sakharine. The movie combines the plots of Tintin: The Secret of the Unicorn and Tintin: The Crab with the Golden Claws.

Not to be confused with the 1990s animated series The Adventures of Tintin.