Western Animation / The 13 Ghosts of Scooby-Doo
aka: The Thirteen Ghosts Of Scooby Doo 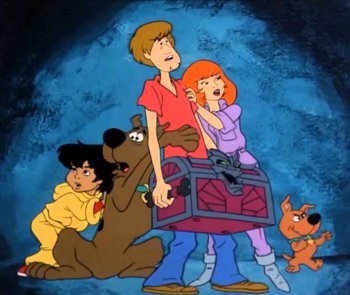 Only you can return the demons to the Chest... because you let them out!
"This is a warning to all living mortals, that whosoever opens this Chest of Demons will release 13 of the most terrifying ghosts upon the face of the Earth!"
Advertisement:

It begins when Scooby, Shaggy, Daphne and Scrappy end up in Tibet by plane crash, and Scooby and Shaggy are tricked into opening the Chest of Demons, a chest containing 13 powerful, terrifying ghosts each bent on world domination. Fated to return the malevolent spirits to the chest, the team is guided by mysterious mystic Vincent Van Ghoul, played by Vincent Price, who exasperatedly helps our heroes catch them all before it's too late.

This show uses the globetrotting Scooby-Shaggy-Daphne-Scrappy format of the late 1970s/early 1980s shows, though it is the last show to do so, also adding a new member of the gang in the form of Flim-Flam, a child con artist who runs into the gang and joins up with them. It was also one of the first shows to substantially feature real ghosts and supernatural creatures as opposed to people in masks, and the self-referential parody, pop-culture references and fourth wall breaking that would go on to characterize A Pup Named Scooby-Doo (this is the result of Tom Ruegger, who produced the latter, being associate producer on this one).

Despite the show's title and premise, only 13 episodes were produced, and since the premiere established the plot, the gang only captured 12 of the ghosts before the show ended. The 2019 direct-to-video movie Scooby-Doo! and the Curse of the 13th Ghost serves as a conclusion to the show, with the whole gang helping Van Ghoul take on the last of the ghosts.