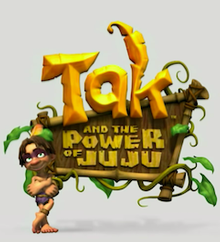 Tak and the Power of Juju proved to be such a popular video game that Nickelodeon, who owned the rights to the property, started working on a television series based on the game series.
Advertisement:

Premiering in August 31, 2007, the series was a co-production between Nickelodeon Animation Studios and the video games' distributor THQ. Due to low ratings, the series only lasted one season, with the final episode being an hour-length Origins Episode special that aired on January 24, 2009 titled "Destiny Schmestiny".

In an effort of promoting the series, Tak was featured as a playable character in the final two Nicktoons Unite! games; Nicktoons: Attack of the Toybots and SpongeBob SquarePants featuring Nicktoons: Globs of Doom. The Tak and the Power of Juju cartoon also had two tie-in games, Tak: Mojo Mistake for Nintendo DS and Tak and the Guardians of Gross for Wii and PlayStation 2.

Alternative Title(s): Tak And The Power Of Juju