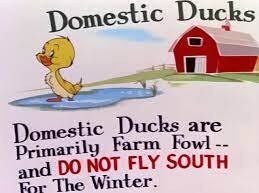 Like that's going to stop him.
Southbound Duckling is a 1955 Tom and Jerry cartoon released by Hanna-Barbera. It is one of the most notable T&J shorts due to its infamous and jarring ending.
Advertisement:

The short begins with Quacker the Duck packing his bags as he prepares to head to Florida for the winter. While he says his good-byes to Jerry before departing, the mouse stops him and shows him a wildlife book stating that domestic ducks like himself do not fly south for the winter like their wild cousins. Dismissing this, Quacker tries to take off and join the overhead flocks, but finds that his little wings aren't up to the job. Determined to go south no matter what, the duck resorts to all kinds of tactics in order to travel. One of his attempts gets the attention of Tom, who develops a hunger for southern-fried duck. After several run-ins with the cat, Jerry and Quacker manage to escape onto an airplane bound for Florida. Unbeknownst to them, however, a certain cat managed to get aboard, leading to a rather shocking conclusion when the two are relaxing on the beach.