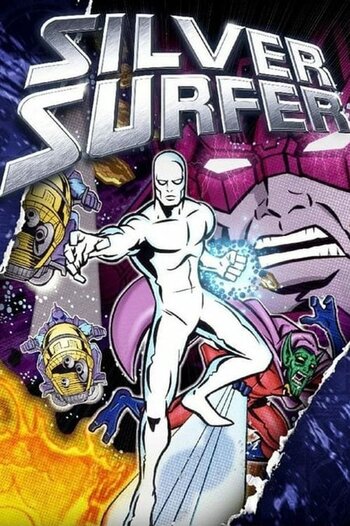 Silver Surfer was a shortlived Animated Adaptation based on the Silver Surfer comic book character that ran on Fox Kids in the 1998-99 season.
Advertisement:

Norrin Radd is a pacifistic man living on the progressive, harmonious planet Zenn-La, until the cosmic entity Galactus arrives. The Devourer of Worlds proceeds to consume the planet's energy, but Norrin Radd convinces him to serve as his Herald to find planets for him to feed on, thinking he can both save his home and other worlds by leading Galactus away from populated worlds. Galactus instead scrubs his memories and imbues him with a portion of the power cosmic, and the Silver Surfer is born. After encountering Earth and saving the planet from his own master, he starts to roam about the cosmos as he tries to find his way home to Zenn-La and his love Shalla-Bal.

The series was cancelled after only one season thanks to Marvel's bankruptcy, ending on a cliffhanger (a planned Captain America cartoon was also a victim).