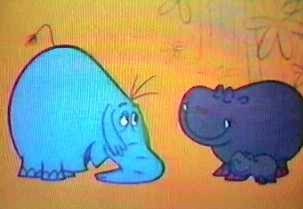 It stars Sidney the Elephant, one of the running characters invented by Deitch when he took over the studio after Paul Terry retired. Sidney, the perpetually nervous, jittery elephant, is feeling down in the dumps in this one because his parents ran off and joined a circus. Despite the fact that he is 44 years old, Sidney goes off in search of a mom. A hippo and a giraffe laugh him off, but when he finds a female monkey without a child, he's adopted...much to the displeasure of his new adoptive father.