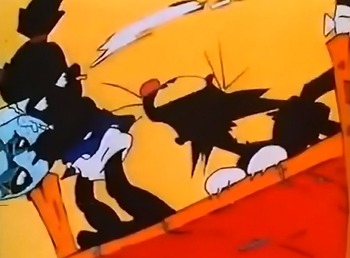 It is an animated music video of the song "Seaside Woman" by Suzy & the Red Stripes (but not really, see below). The simple story, set in Jamaica, involves a fisherman, his wife, and their little daughter. The "seaside woman" is the mother, who mends her husband's nets, takes care of their little girl, and makes beads and baskets to sell in the marketplace. The husband catches fish, while the little girl cavorts on the beach and eats the sweet potatoes her mother cooks.

"Suzy and the Red Stripes" was actually Paul McCartney's band Wings. The song was a response to a lawsuit by McCartney's publishers, who accused Paul McCartney of crediting his wife Linda, a photographer, as co-writer of his songs in order to control half of the royalties. in response Linda wrote "Seaside Woman" by herself. The song was released in 1977 and the cartoon followed three years later.