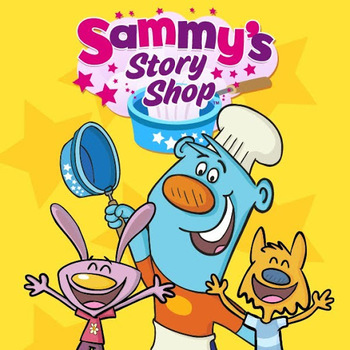 Let's cook up a story about tropes.note From left to right: Sharlene, Sammy, and Wiggy.
"So sit right down, we'll cook up something good
We'll be shaking it up in the neighborhood
With a little bit of this, and a little pinch of that
We'll stir up the magic...
It's Sammy's Story Shop!"
— "Do It Yourself" Theme Tune
Advertisement:

Sammy's Story Shop is an animated children's TV series that ran on Qubo from November 3, 2008 to September 27, 2015. The series centers around the titular character, a young blue ferret chef who uses his magic pan to cook up various stories for his two best friends, Wiggy and Sharlene.