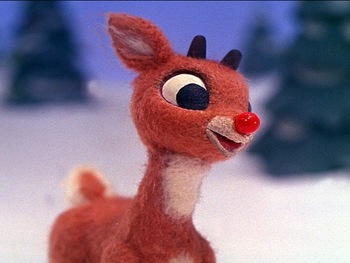 You know Dasher and Dancer and Prancer and Vixen
Comet and Cupid and Donner and Blitzen
But do you recall
The most famous reindeer of all?
"Could it be that some of you are not acquainted with the story of Rudolph? Well, pull up an ice block and lend an ear..."
— Sam the Snowman
Advertisement:

Rudolph the Red-Nosed Reindeer is a Stop Motion animated Christmas Special based on the classic storybook by Robert L. May, made by Rankin/Bass Productions and first broadcast on NBC (under the General Electric Fantasy Hour umbrella) in 1964.

It's about Rudolph, Santa Claus's ninth reindeer and son of Donner. Rudolph, to the shock of his parents, is born with a red nose which glows when he gets excited. Santa, who's kind of a Jerkass throughout, tells Donner that he'd better cover up his son's red nose or Rudolph will never get to pull Santa's sleigh. Donner tries but eventually the mud on Rudolph's nose falls off and exposes his secret, leaving him to be mocked and ostracized by the other reindeer.

A second plot thread follows Hermey, one of Santa's elves. Unlike all the other elves, who are content to hammer out toys for all the good little children of the world, Hermey has dreams of being a dentist. His rage-prone supervisor won't tolerate this talk of dentistry, however, and Hermey runs away. He meets Rudolph, and they run away together. Together they meet a prospector named Yukon Cornelius, who is searching the wilds of the frozen north for gold. They have adventures that include finding an Island of Misfit Toys where unwanted toys go, and they have to flee from the scary giant Abominable Snow Monster. The whole story is narrated by Sam the Snowman, voiced by singer and actor Burl Ives.

Directly followed (with diminishing returns) by Rudolph's Shiny New Year in 1976 and the crossover movie Rudolph and Frosty's Christmas in July in 1979, while the characters re-appeared in the 2001 direct-to-video CGI film Rudolph the Red-Nosed Reindeer and the Island of Misfit Toys (also made by GoodTimes, ironically.)

The special was also used as inspiration for the North Pole aesthetic in the 2003 film Elf, particularly the elf attire and use of stop-motion characters.

As of 2021, it's the longest running Christmas Special and has been annually airing on television for over 50 years.

Rudolph the Red-Nosed Reindeer and its sequels provide examples of:

Clarice sings an uplifting and emotional tune to Rudolph.

Clarice sings an uplifting and emotional tune to Rudolph.