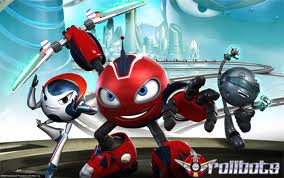 Rollbots is a Canadian Series created by Michael "MCM" Milligan and produced by Amberwood Entertainment for YTV in 2009. The series ended after a single season of 26 episodes, but also aired in the United States as part of The CW's Saturday morning Toonzai block.

The show is set in a World in the Sky called Flip City, which is inhabited by 11 tribes of Transforming Mecha who get around by turning into spheres and rolling (Roll-bots, get it?). Flip City is in turn protected by the Flip City Police Department (FCPD), with the series' protagonist being rookie recruit Spin. Alongside his teammates Captain Pounder, Penny, Lance, Tinny, and Bunto, Spin protects the citizenry from various criminals and villains, most prominently the notorious Vertex and his team of rogue bots.