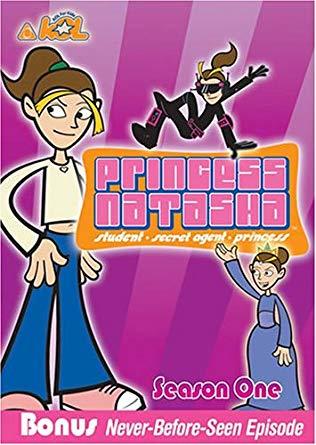 Princess Natasha is a flash cartoon that was developed by Larry Schwarz for AOL Kids. The episodes were released between 2003 and 2006 and total 44 episodes overall, each running between 6 and 12 minutes apiece. The show has been featured on Cartoon Network, ABC Kids, and included products such as a game adaptation through Nintendo and a line of chapter books.

Natasha is the princess of the fictional European country of Zoravia, which is composed of two parts: an old side and a new side. The old side holds all of the country's landmarks while the new side is more technologically advanced. The country is ruled over by King Carl, but was previously ruled over by his older brother Lubek. Lubek had been crowned king after the death of their father, but was ousted due to the kingdom unanimously disliking and voting against him. Upset, Lubek moved outside of the country and launched a series of attacks against Zoravia from the United States.

In order to stop these attacks the ruling family reluctantly allows their daughter Natasha to travel to the United States in order to stop Lubek's plans. However, she must keep her status of royalty and as a spy secret. While in the States, Natasha lives with the O'Brien family. Natasha develops a crush on their son Greg, who already has a girlfriend named Kelly. She also meets Maya, a tomboyish young girl who soon becomes one of Natasha's closest friends. Natasha is assisted by Oleg, an adult Zoravian scientist who is short enough and young-looking enough to pass as a student. School life is awkward for Natasha and is made more so by her duties to the crown, as she must sneak off to combat Lubek's latest plans.