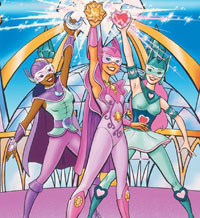 Following in the footsteps of better-known shows such as She-Ra: Princess of Power, Princess Gwenevere and the Jewel Riders (known as Starla and the Jewel Riders outside the United States) was a Magical Girl show very loosely inspired by the Arthurian myths. It was created by Robert Mandell of Adventures of the Galaxy Rangers fame, and even used some of the same voice actors.

Our story follows Princess Gwenevere (or Starla), the teenage daughter of Queen Anya of Avalon, and her friends Tamara and Fallon, as they quest to retrieve the Crown Jewels that keep the magic of the kingdom in check with the help of good wizard Merlin. The girls were chosen to be the Jewel Riders, and each has been given an Enchanted Jewel that gives her special powers: Gwenevere with the Sun Stone, Fallon with the Moon Stone and Tamara with the Heart Stone. Each girl also has an animal friend who can communicate with her, bonded with their respective Enchanted Jewel.

However, trouble strikes when the evil Lady Kale finds the Dark Stone and uses it to banish Merlin to the realm of Wild Magic so she can steal the magical Crown Jewels to bring down her sister Anya and become the new queen of Avalon, taking over all the magic for herself to rule. However, Merlin scatters the jewels at the last minute, sending the Jewel Riders on a quest to get them all before Kale does.

By the end of the first season, the Jewel Riders win but are still unable to rescue Merlin. Season two picks up with Lady Kale meeting Morgana, one of the ancient Grand Wizards. Morgana, too, is trapped within the realm of Wild Magic and so she strikes a deal with Kale to help each other out and return with a vengeance. The Jewel Riders must now search for the Wizard Jewels in order to defeat their enemies and attempt once again to save Merlin.

First airing in the United States in 1995, Princess Gwenevere ran for two seasons, with 13 episodes each season, produced by the same company that made King Arthur & the Knights of Justice. Some call it out as a Sailor Moon ripoff, but it's a cute series for fans of the Magical Girl and Magical Girl Warrior genres. It's obscure, but seems to have a bit of a cult following. It also heavily inspired the Avalon: Web of Magic series.