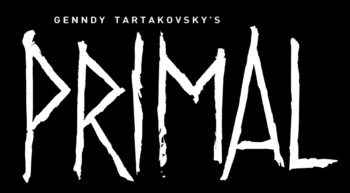 Hunt. Kill. Survive.
"All Earth was but one thought — and that was death."
- Darkness,

Genndy Tartakovsky's Primal, also known simply as Primal, is a ten-episode action-adventure mini series produced by Cartoon Network Studios for [adult swim]. It is Tartakovsky's second series created for the station (following the 2017 revival of Samurai Jack) and his fourth overall.

The limited series follows Spear, a caveman at the dawn of evolution, and Fang, a tyrannosaur on the brink of extinction. Bonded by similar tragedy, the duo form an unlikely friendship that becomes their only mutual hope of survival in a violent, primordial world.

While Tartakovsky's work is famous for being light on dialogue, this series is notably his first project to not to have any dialogue whatsoever, the only human vocalizations being animalistic grunts and yells.

was showcased on August 27th. The first five episodes of the series ran from October 7th to October 11th, 2019, and were later repackaged into a theatrical film entitled Genndy Tartakovsky’s Primal — Tales of Savagery. A second batch of episodes are scheduled to air in 2020.