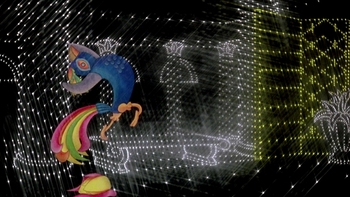 Paradise is an animated short film by Ishu Patel. It was produced by the National Film Board of Canada.

A blackbird lives somewhere in India, near the sultan's palace. The blackbird flies to the sultan's window and finds that the sultan has a glorious magic bird that he keeps in a tower. The magic bird is a shapeshifter and can transform itself into almost any form, changing size, shape, and color in a series of brilliant displays for the entertainment of the sultan.

The blackbird watches the magic bird perform for the sultan and is enchanted. It then decides to fashion itself into a beautiful bird for the benefit of the sultan. It paints it black feathers blue with berries, fashions a fake beak, and steals a lot of more colorful feathers from other birds. With all this finery the now unrecognizable blackbird swoops into the palace and performs for the sultan. The sultan is entertained—but with unexpected consequences for the blackbird.

The soundtrack is by Gheorge Zamfir, aka "Zamfir, master of the pan flute."