Western Animation / Men in Black: The Series
aka: Men In Black 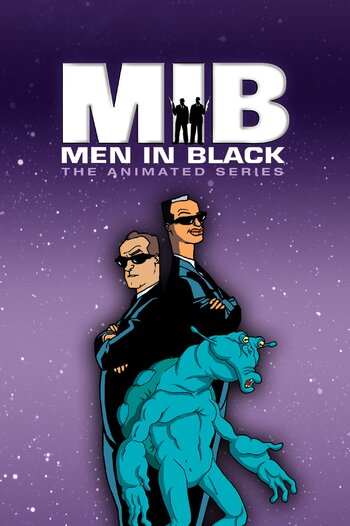 Men in Black: The Series (1997-2001) was an animated series spun-off from Men in Black. It originally aired on Kids' WB!

Filling the gap between the first and the second movie (5 years), this series is what fans were left with. It was quite successful, and it helped jump to popularity some very minor characters from the first movie, such as Frank the Pug and the Worms (which would later appear as important characters in Men in Black 2).

It's worth noting that this series is actually an Alternate Continuity of the movies, even getting to the point that the "MIB movie" is a movie inside the series continuity!

The show has spawned one video game, and it was seen in reruns on The Hub prior to its rebrand as Discovery Family. In 2021, Sony Pictures Television began releasing episodes of the series for free on their Throwback Toons YouTube channel.