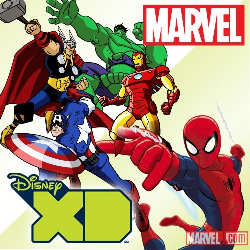 Marvel Universe was a programming block that aired on Disney XD, consisting of material based on properties originated by Marvel Comics. It was discontinued in 2015, though the remaining shows continue to air under the banner of Marvel on Disney XD.

The block featured animated series, shorts such as Marvel Mash-Up, as well as behind-the-scenes looks at the Marvel Cinematic Universe. The block's shows exist within their own self-contained universe/canon continuity (which may or may not be part of the Disney Channel Live-Action Universe, since Ultimate Spider-Man crossed over with Jessie in one episode).

Compare to DC Nation, a similar, short-lived block on Cartoon Network that consisted of material originated by DC Comics. Not to be confused with Marvel's published universe.

Shows featured on this block include: