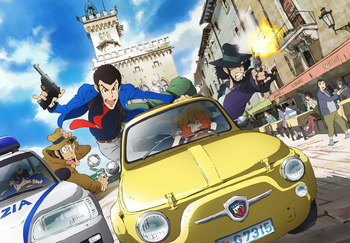 Lupin takes on The Land Of Love.note From left to right: Inspector Kōichi Zenigata, Arsène Lupin III, Fujiko Mine, and Daisuke Jigen.
"Great artists are like great thieves, they both know how to steal people’s souls."
— Arsène Lupin III (Second Half)
Advertisement:

Released in 2015, Lupin III - L'avventura Italiana (Lupin III - The Italian Adventure) is the first series to star Lupin III in over 30 years (though the Spin-Off / Prequel Lupin III: The Woman Called Fujiko Mine did air three years prior). It is preceded by 1984's Lupin III: Part III and followed by 2018's Lupin III: Part 5. The show is also notable for airing in Italy before its Japanese debutnote Hence this is under "Western Animation" according to the wiki rules despite being an anime production largely as a thank you to the country for their support of the franchise. TMS Entertainment again handles animation duties along with Telecom Animation Film.

Set in the Present Day, Arsène Lupin III and his gang are hanging out in Italy and San Marino, planning heist after heist. Lupin has picked up a new Love Interest by the name of Rebecca Rossellini, an adrenaline junkie who just started to pick up Phantom Thief habits for the stimulation. The first episode has Rebecca marry Lupin, and immediately out-thief him for the San Marino crown, leaving him skydiving without a parachute to spend the honeymoon by herself. What more shenanigans can this crew accomplish with their newest member?

It aired in Italy for 26 episodes on the Italia 1 channel between August 30, 2015 and November 30, 2015, while in Japan it aired for 24 episodes (two episodes broadcast exclusively in Italy) on NTV between October 1, 2015 and March 17, 2016. Crunchyroll streamed the Japanese audio version under the title Lupin the Third Part 4, and Discotek Media put out the series on home video in 2017 with the English dub included. The English dub premiered on Adult Swim/Toonami on June 17, 2017, and is also available for streaming on Funimation, two weeks behind the Toonami broadcast.