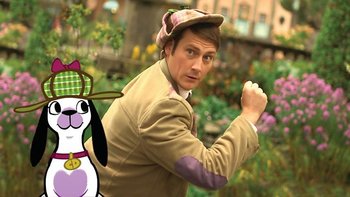 Charge your batteries. Let's solve a mystery!
"There's a mystery to solve, and that's no lie
Call the detectives, before things go awry!"
Advertisement:

The description for Llan-ar-goll-en has gone missing?! Sound the siren!!!

Llan-ar-goll-en is a Welsh detective Preschool Show created by Siwan Jobbins that originally ran on S4C's Cyw block from 23 December 2013 to 14 March 2016. Produced by Twt Productions and Cwmni Da, the show follows the escapades of two detectives that are complete opposites from each other; clumsy Prys ar Frys and his talking dog companion Ceri, who solve many mysteries in the titular small, wacky village where things tend to get lost. Prys wants to get things done immediately and often jumps to silly conclusions, while more sensible Ceri always has the right idea and thinks things through. It lasted for 51 episodes (that typically ran for 12-14 minutes) across two series, including a half-hour Christmas Special.

The village of Llan-ar-goll-en was filmed in Portmeirion, Wales. The show is mostly live action, but all of the animals are animated, such as Ceri the Dog-tective. It was broadcast in Welsh with English subtitles, as an English dub was never produced.

Llan-ar-goll-en is often compared to Blue's Clues, another preschool show about a live action man and his animated female dog solving mysteries, but the man can't quite find the answer without some help. Where this show mostly differs is that it's more of a traditional detective show, it avoids Fake Interactivity with the audience, and the world of Llan-ar-goll-en is predominantly live action instead of animated, almost like it's an inversion of the popular Nick Jr. show.

You can view all of series 1 here

. See the showreel for series 1 here

. Some character bios (in Welsh only) were uploaded to Cwmni Da's YouTube channel

, with the remaining three being uploaded to Vimeo

. Interactive apps and e-books were made for the show and released on the iTunes appstore and Google Play.

Oh, and the show also has an incredibly catchy Theme Tune that won't leave your head, even if you don't speak Welsh. You can listen to it here

My nose is twitching. It's time to go a-troping!

And that's how we solved the mystery of the ruined life!
Feedback