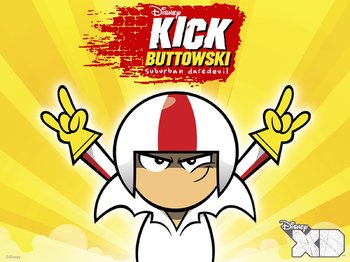 Kick Buttowski: Suburban Daredevil is one of Disney Television Animation's line of animated series, focusing on the eponymous character, a seemingly fearless 10-year-old with the looks of a cute mascot coupled with the six-packs-a-day vocals and personality similar to Wolverine, who aspires to become the world's greatest daredevil. His adventures are aided by his best friend/stunt coordinator/sidekick Gunther, and hindered by his older brother Brad, who despises his younger brother's antics with a vengeance. The show premiered on Disney XD on February 13, 2010 and ended on December 2, 2012. It has also received a few Adobe Flash games, which are listed here.
Advertisement: