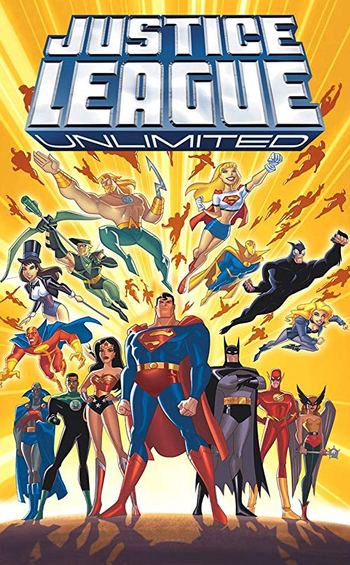 This is not your parents' League.note Top row, from left to right: Red Tornado, Zatanna, Green Arrow, Aquaman, Supergirl, Doctor Fate, Wildcat, and Black Canary. Bottom row, from left to right: Martian Manhunter, Green Lantern, Wonder Woman, Superman, Batman, The Flash, and Hawkgirl.
Superman: I once thought I could protect the world by myself, but I was wrong. Working together, we saved the planet, and I believe that if we stay together as a team, we would be a force that could truly work for the ideals of peace and justice.
The Flash: What, like a bunch of Super Friends?
Superman: More like a Justice League.
The Flash: Do you have any idea how corny that sounds?
Advertisement:

Justice League (also known as Justice League Unlimited) is an animated adventure series based on the Justice League of America, with seven core heroes: Superman, Batman, Wonder Woman, Green Lantern (John Stewart), The Flash (Wally West), Hawkgirl and the Martian Manhunter. Existing in the same universe as Batman: The Animated Series, Superman: The Animated Series, Static Shock (post-retcon), Batman Beyond, and The Zeta Project, this show continued several story threads from those series and introduced new characters who had not previously appeared.

Banding together for the first time to face powerful alien conquerors, Superman, Batman, Wonder Woman, the Flash, the Green Lantern (John Stewart), Hawkgirl, and the Martian Manhunter officially organize themselves as a team, anticipating having to deal with other threats that they cannot face alone. The series lasted two seasons and 52 episodes (most of which were two-parters, with three three-parters and a single standalone episode). To avoid overcrowding that would come with featuring every member in every episode, between two and five members would be the focal point of a story and the complete League appeared only a few times. Turning most stories into two or three part episodes allowed for a much larger scope that could not be accomplished in 22 minutes.

The successor series, Justice League Unlimited, added more heroes from DC Comics, many of whom had never before been animated. After the events of the second season, the League recruit heroes from around the world to be prepared for the most powerful threats. Instead of the two or three part episodes, this series returned to the single episode format, which allowed for more obscure heroes and minor comic arcs to be spotlighted. To balance this out, a very strong Myth Arc was formed telling of a Government Conspiracy against the League, picking up from a few previous episodes, not just from the first Justice League series, but all the way back from Superman: The Animated Series. In addition, the villains get desperate as they have to face against a very powerful and well organized Justice League and eventually create the Legion of Doom in response. The series lasted 39 episodes and was the last show overall in the DC Animated Universe.

Both iterations of Justice League were distinctive among superhero series for being true ensemble pieces. Pick any member of the core cast and in any given episode he or she might be the main hero of the story, used mainly as part of the larger team, or never even mentioned at all. Supporting cast members rotated out weekly, especially in Unlimited. In addition, while Jack Kirby's Fourth World creations were used extensively in Superman: The Animated Series, Steve Ditko's creations got the same treatment in this incarnation.

There have been several animated movies featuring the Justice League; they are separate from the DCAU, but frequently use the same voice actors from this show. Go to DC Animated Movie Universe for more information.

The Injustice: Gods Among Us video game series also features the reprises of numerous charactersList George Newbern as Superman, Susan Eisenberg as Wonder Woman, Kevin Conroy as Batman, Phil LaMarr as John Stewart, Adam Baldwin as Hal Jordan (replaced by Steve Blum in the sequel), Carl Lumbly as Martian Manhunter, Jennifer Hale as Killer Frost., but also does not take place in the DCAU.

The series has finally received an official animated film continuation in the form of Justice League vs. The Fatal Five.

An official comic continuation of the show, Justice League Infinity, co-penned by DCAU writer James Tucker, is set for release on DC Digital First in May 2021 and paperback in July 2021.

The Justice League Unlimited set for HeroClix, a tabletop game, was released on May 2020.

Due to the number of tropes present, the page has been split into two sections.