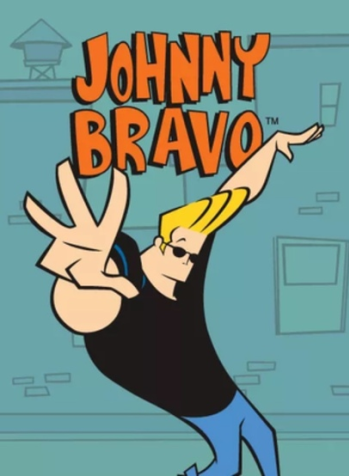 Do the monkey with me!
Advertisement:

One of Cartoon Network's first original characters, Johnny Bravo was based partly on Elvis Presley and partly on Fonzie from Happy Days. Johnny takes a little too much pride in his appearance, and has little, if any, success at romance or anything else he tries. Not that this fazes him much. He also tends to run into celebrities, including Farrah Fawcett, Donny Osmond, Adam West and the cast of Scooby-Doo.

The title character first appeared in a 1995 animated short, featured in World Premiere Toons. He received his own series in 1997 which went unrenewed after 13 episodes due to questionable ratings. In Season 2, Cartoon Network retooled the series without creator Van Partible's input to critical acclaim from most fans, but total hatred from those too at home with the original series. They also lost the writing contributions of both Butch Hartman and Seth MacFarlane (although this is justified, as both had moved on to do their own TV shows). After sitting in limbo once again, the series reverted to its old style (with Partible reinstated as showrunner) for the fifth and final 13 episodes of the 65-episode run (which also had inconsistent ratings).

The show is notable for the major changes the style in its humor experienced during the 65 overall episodes. In the pilot, and the first and final seasons, the humor was more mature and Johnny was portayed as a loser and more socially lacking than stupid. The retooled series (in between), however, was aimed more at the show's younger audience. The amount of slapstick increased and Johnny's stupidity was greatly emphasized.

The other main characters are Johnny's mother, Bunny Bravo, and the neighbor girl, Suzy. Other characters include Carl Chryniszzswics, a nerd who insists he's Johnny's best friend, and Pops, mentor to Johnny and owner of a local diner and quite possibly a few other, sketchier business ventures. Visit the characters page here.

In the last few years of the show's run, Johnny also had a spin-off program called JBVO. In it, Johnny was the host who accepted requests via mail, phone or online for any Cartoon Network shorts that weren't too long to be played. It didn't last too long.

In 2009, as a co-production with Cartoon Network Asia, Johnny Bravo received a comeback special in the form of a TV movie Johnny Bravo Goes to

If you're looking for the character of the same name's page, here it is.

Hey, baby! Check out the tropes pertaining to my series: